The Cybersecurity and Infrastructure Security Agency (CISA), a part of the Department of Homeland Security, has issued Analysis Report (AR20-268A) on Thursday September 24th, 2020. The report states that CISA became aware of a potential compromise of, as of now, an unnamed federal agency’s network. Through collaboration with the affected agency, CISA was able to determine that the impacted agency’s environment had been compromised:

CISA analysts were not able to determine how the cyber threat actor initially obtained the credentials. It is possible the cyber actor obtained the credentials from an unpatched agency VPN server by exploiting a known vulnerability—CVE-2019-11510—in Pulse Secure (Exploitation for Credential Access [T1212]). In April 2019, Pulse Secure released patches for several critical vulnerabilities—including CVE-2019-11510, which allows the remote, unauthenticated retrieval of files, including passwords. CISA has observed wide exploitation of CVE-2019-11510 across the federal government.

What does this mean?

The attacker had acquired usernames and passwords to multiple users’ Microsoft 365 accounts and domain administrator accounts, possibly through a known vulnerability for Pulse Secure (its existence was first reported in April of 2019), which they then used to gain access to the agency’s environment. The foot in the door and the keys to all the locks. Using these credentials, the attacker was able to view emails and download attachments that contained unsecure transmission of further credentials and access, in which they began their full discovery and comprise of the agency’s environment via Active Directory. I recommend reading the report in full as I’m only skimming the surface, though it should be an eye opener to some.

How can I address this?

Here are a couple of items that can be rectified almost immediately by change of behavior, process, and use of maintenance windows.

One item that jumped out at me from the report was the compromise of the agency’s Microsoft 365 accounts and how identity protection would have helped by providing risk detection and remediation.

With this report in mind, at a risk detection and remediation perspective, the IP Addresses from the MICROSOFT 365 sign-in by the attacker would meet the classification criteria of Atypical Travel. Remember from the report “the threat actor performed Discovery [TA0007] by logging into an agency O365 email account from 91.219.236[.]166” when we look at that IP Address, we get a return from Budapest. The second address coming from New York.

The requirement to utilizing this feature is to ensure that your Azure Active Directory Connect service is configured with Password Hash Synchronization. To get the full picture on sign-in risks, I would recommend reviewing Microsoft’s documentation which includes a table of the risks it’s constantly evaluating, that table can be found here. 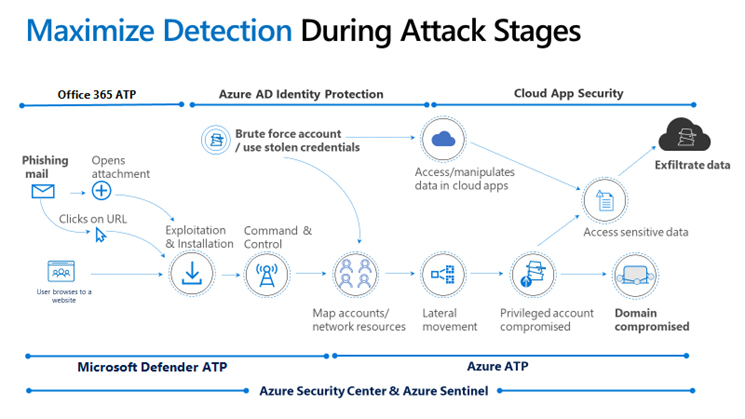 Identity protection is only a piece of the security puzzle. Utilizing the Azure Security Center & Sentinel stack to its fullest with solid patching, vulnerability awareness, and keeping credentials out of plain text communications will greatly reduce your environment’s attack surface.

If you need assistance with your Microsoft environment or the security around it, EDCi can help, give us a call!